I love fragrant outings in unknown territories… It means I can act clueless.

My plan (scheme, actually) early one December was at once evil and genius. I would wander around promoting the idea that I had never worn a fragrance (despite the fact I was lingering around with both arms full of wonderful smelly things) and ask for advice.

I began at the YSL counter, with a pretty and impertinently disinterested young girl manning the register with an older lady doing her own thing. After looking at the bottles for about 5 minutes hoping she would come on over to help, I had to verbally nudge her for assistance. I told her the exact specifications of my wants. I wanted a fragrance because I felt I was now age-appropriate to wear one, and I wanted it to be a little different from the rest.

Whilst I understood YSL was not the sort of house to deal with younger clientele, it was a challenge that was invariably pleasing to watch. She recommended M7 Oud Absolu, which I actually already owned (of course I did not disclose that information). This was particularly meritorious on her part, and I had mentally given her kudos. I told her it was not to my liking nevertheless.

She then, as I expected, went through the whole ‘L’Homme’ range which I find a little tepid for my tastes. Perfectly nice, but nothing that knocks anyones socks off. I dismissed these also.

Nevertheless, saving the best for last, I had decided to be a little sly and enquire about this foreign looking, observably dated fragrance called “Kouros” (Pierre Bourdon – I love you). Her stoney gaze was priceless when I enquired. It was the perfect combination of repulsion, fear and warding. Her eyes widened, she was in shock without me even smelling it. “Oh dear. No, no, no.” she firmly said. Without her knowing that I adore the genius of making a fragrance that resembles urinal cakes, I persisted and demanded I smell it.

Picking up the bottle with intense concentration, it was as if she was holding something of superlative fragility and of feather brittleness. She had sourced a blotter and stretched her arms out far away from her nose, and spritzed once. She handed me the blotter, and I raised it under my nostrils.

“I love this” I proclaimed.

Her facial expression was a clear ‘what the hell’ as I waxed lyrical about this fragrance. In retrospect it was all a bunch of exaggerated, quasi-grandiose verbal diarrhoea. I told her it was amazing, sophisticated, and burley. She still had no clue.

I particularly remember saying something along the lines of “This suffers from a horrible condition called deliciousness, and I could sprinkle this with the same generosity as sugar”.

She legitimately told me not to be silly, and handed me the coffee beans. 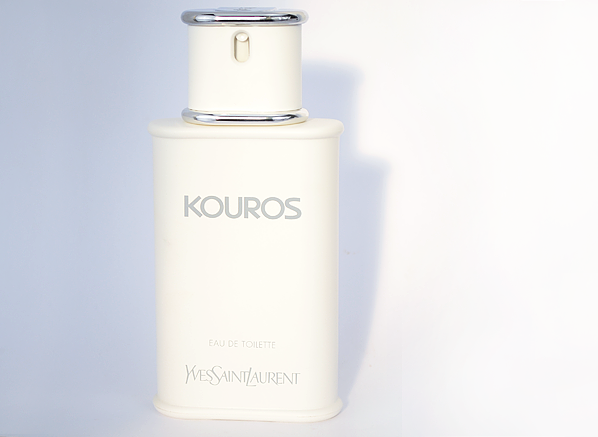 When I had talked earlier about Antaeus by Chanel, I recalled my pride in finally being able to conquer the scent. The officious and oily scent of castoreum found in abundance in Antaeus was placed on the skin with immense happiness. Its tightness had diffused on the skin and its undergrowth of warmth and animal facets smoothed marvellously.

The ‘kicker’ with Kouros however is that in place of castoreum we get a wealth of civet, spread on like good French Lescure butter on toast. Of course it’s French: it’s grand and it’s civet – a notoriously challenging (and now) synthetic note when used up front, that is generally more readily accepted when used in the background of symphonic florals or classic feminine scents.

In Kouros (with much delight I have an original vintage bottle), the civet is compounded with the overloaded yet shimmering accord that was a paradigm for the time period: artemesia and coriander seed. This is dry and wet. Cool and hot. A civet note liberated with aromatic flounce. A traditional creme from a cat’s backside modernised. The ripe smell of a man and golden bodies juxtaposed with dark alleyways and vegetation.

Without a doubt this is unsettling, and largely unbalanced at this stage. A spice feature is urging to rise up top but the animalics just won’t let it at this stage. Instead the spices are forced to pan out. Medicinal clove, funky patchouli, warm cinnamon – it is classic solid construction. The best part? There is something ingenious about the smell of a clean male bathroom – orange flower, aldehydes, and bergamot then fragmented with the illusion of masculine bodily warmth: civet, ambergris, spice, and jasmine indolics.

I confess however, I find this fragrance to be very clean smelling – a sultry animal feature that is protecting. A muskiness that comes across as human.

I give this time and this fragrance cools. Dried flowers and incense mainly contributing to the scent of an unwashed pair of underwear or a sweatshirt. Layered with vanilla, it achieves the effect of an attempt to coverup smell with another smell rendered pleasant. Say, spritzing fragrance onto a sweaty male armpit.

This stuff gives you big balls.