On Approach: What Do I Need to Know Before I Begin to Know?

Consider my question in this way: it begins with an event, and a manner of entering into this event. Consider this event in the instance of perfume analysis. Firstly, is analysis the right word here? Does analysis occur after the event I will now attempt to detail? Or, am I better off, more accurate, and more apt, if I use words like approach, or enter, or engage with, or begin with? My question thus concerns the problem of analysis, if we can so call it that. When does analysis begin, and what precedes analysis? If there is a preceding point before meaningful analysis, what is that point? How do we move from one to the other?

Take, in order to demonstrate my point, an example of perfume analysis. I speak of the Hermes Jardin series of scents. These fragrances are construed as narratives which capture a diverse range of unique garden vignettes. Not quite Edenic, but certainly phantasmal. But to what extent ought the narrative match the fragrance itself? It is easy for me to make the claim that the garden inspired by the Nile river, or on the top of a Parisian rooftop, simply makes sense. Why? Because when I smell Sur Le Nil all is revealed. The Nile is revealed to me via the scent. It works. The narrative matches the scent. Or, does the scent match the narrative? This is my problem. It too is a problem of evaluation, for it seems that any evaluative act is enriched by the rich joys of backstory, as if the narrative were to only reveal itself if the narrative were first hinted at; disclosed to a minor degree. How am I to know that this is the scent of the Nile without first being told this were so from some external source of influence? Is it crucial to look beyond the smell itself? Can I engage in true analysis if I do not know what I am analysing? How ought I analyse?

This is the power of the title (bracketing all other considerations at this time). Not only does the noun designate a thing in the world, whether specific or general; present, absent, or existing purely in the head, but in the very act of designation, the label has the power to describe and hence disclose. For me to give the title Sur Le Nil is to imbue the entity with the charge of all the evocations that Sur Le Nil means (in) itself. So, am I to know what it means to be ‘by the Nile’ before I engage with Sur Le Nil? Am I made a better reviewer for knowing of and about this very experience? Am I to literally become a tourist in the perfumer’s mind? To know what the author had in mind and what they had experienced? That is, their experience of being by the Nile? Or is it their job as the creator to make the experience you and I interpret (as individuated agents) as universal as possible in its reception? This is the hermeneutic mystery. And even if this were so, that is, the perfumer was at their most charitable and universally-minded when they constructed Sur Le Nil, ensuring it is the Nile for all, would this very idea be evoked if it weren’t for the title, which, as argued, so powerfully frames our approach and our expectations? The frame sets something in focus, but it equally keeps many things out. 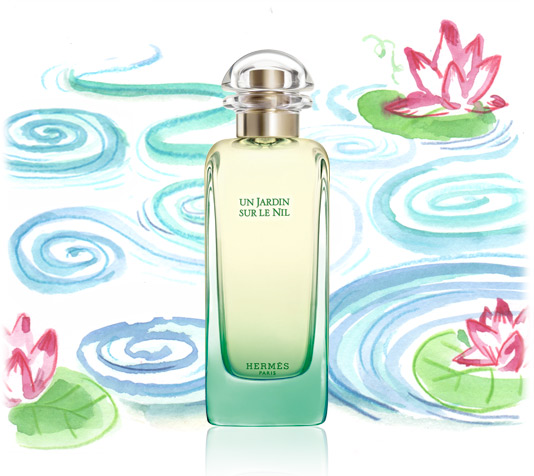 In response, if I were to contend that the smell of Sur Le Nil was more like the Bretagne seaside to me, or perhaps more evocative of a leather tannery to me, would these interpretations be rejected in light of the framing effects of the title this artefact has been conferred? Many would want to appeal to the relative-subjective in instances like this: “what I smell is private to me alone! Any interpretation is a valid interpretation!”, but I feel my pump elegantly keeps the problem alive, and problematises the notion of pure subjectivity.

But surely to say that Sur Le Nil smells more like the Bretagne seaside is closer in correctness (we will call it ‘correctness’ here for the sake of convenience) than to say it smells like a leather tannery? For the idea of the Nile is that of exoticism and freshness, and the idea of Bretagne is of exotic sea air and marine algae, and they are kind-of-sort-of-close, right? But to speak of tanneries – of raw hide and strong penetrating odours – that just feels fundamentally categorically misplaced. If we are blind, and if reviewers are of a sound mind and an honest disposition in their personal assessments, then perhaps any claim is acceptable: to say that the unnamed Sur Le Nil smells of a leather tannery to me, is incontestable. But to say that the named Sur Le Nil fragrance smells of a leathery tannery to me, feels wrong, and would seem contestable. So, perhaps the event I speak of, that which precedes analysis, is a minimal sort of disclosure. An event which orientates analysis in the correct general direction. It is the outline of a frame: foregrounding and backgrounding. And as the hermeneutic question goes: what are the forestructures of our understanding?

From this, I could delve further. But at this stage of my essay, I can at least present a normative claim. It is a claim directed to the evaluators and the reviewers of the world: in any engagement, and any consequent discourse of the analytical-critical kind, it is imperative for the reviewer to disclose to us how much they know: to let us know how much they know. This ensures that the reader understands how you have reached your judgments and your authoritative verdicts in the interest of transparency.

If you evaluate blind and if you disclose this fact to us, then we can at least know that you have tackled the scent in itself, no less or no more valuable than approaching a scent framed by its extrinsic features and narrative (for which reviewing then becomes a measure of how effectively the contents – its scent – matches all that surrounds and imbues the work). If you can review in these two instances, blind and then informed, perhaps then you would be positioned to make some interesting and enlightening, and certainly edifying, remarks about this relationship, and then determine whether it was achieved or not, and if so, to what extent?

This, I feel is a step towards good and true reviewing. A sort of gradual disclosure and uncovering: all things considered in the right time and order.

And here is a note on framing itself: firstly, it is inevitable. Even when blind, framing occurs at its most weak: one still assumes a scented fragrant object of analysis, and with that very fact is the knowledge of a whole history of perfume and tradition (up to the limits of the subject). Of course, there is no precision per se: to speak of everything, an entire tradition, is to virtually say nothing at all really – but even this alerts us as to what we can expect, and what we ought not expect. For how common has Calone been in the history of perfumery, really? And how obnoxiously prevalent is Ambroxan in modern compositions? When we detect Ambroxan, the signification is made that this may well be a modern perfume, it is probably masculine in nature, and so on. The point here is plain: we cannot escape tradition-qua-framing in our analyses. And therefore, I believe that framing comes in degrees, and begins minimally. I have already shown this at its weakest and most minimal thus far. For if I begin blind – or more accurately – at the standpoint of the broadest, most whole-encompassing frame of tradition, and then I am informed that this particular scent of evaluation is intended to be ‘feminine’, and/or comes from the house of Chanel, or was made in 1921, does my analysis not become more focused? That is, as the frame focusses, more and more possibilities of interpretation move from the foreground and into the peripheries. But I am careful here. I do not speak of a narrowing or a deductive sort of elimination (although this is the perpetual risk of any reviewer, or analyst, or critical thinker), because no possibility is ever truly eliminated, and it would be myopic and rather foolish to suggest that the creative capacity of the perfumer is limited solely by their tradition and an affinity for all that is en vogue.

This, I believe, is the answer to all revolutionary artistic expressions: it is perhaps an existential moment, or what is commonly called artistic genius and the radical imaginary – a break from conformity. In that way, a reviewer is also at a loss because of this tension: there is the pull of history and image against the non-conformist actions of the creative perfumer, and there is also the force of socialization and cultural norms and expectations itself. What does this tension mean? I am querying the benefit of the frame. At its broadest, the frame may fail to orientate us because the perfumer gets to create, and they can (theoretically) create in any way they want. Any act of creation maintains the possibility of a radical new creation, thus defying expectations and the expected structural order of the foreground and background. Radical creation may result in the creation of something new entirely (such as a new molecule, ISO E Super for instance, although even then the unprecedented new is always checked against the background of history), and/or it may reach in and grasp what has been relegated to the periphery, placing it unexpectedly into the foreground. For these reasons, frames are fallible.

I do not believe this tension can be totally overcome, but one can acknowledge these difficulties. If you outline what you expect, outline what you know, and highlight your presuppositions, then some honest reviewing can be done. For if I am not told a certain something, and am thus not orientated to look at the object of analysis in the right way, then how would I even come to know (more of) it? From this, it is agreed that a minimal amount of knowledge is required to obtain further knowledge. This is what I need to know before I begin to know.

One thought on “Monthly Musings: On Approach – What Do I Need to Know Before I Begin to Know? (April 2019)”