Cumin in perfumery is a polarising note, in the way it captures a sweaty, human aspect. I for one adore cumin and all of its bodily associations, and the way it delivers a penetrating warmth that saturates the fragrances from top to bottom. Most spices are able to deliver a similar quality and are found in what I think are some of the most worthwhile fragrances.

Spices, like cumin, caraway, cinnamon, cardamom, coriander seed, have a bright yet off-toned hue, sharp and persistent while able to maintain a long and intriguing varnish over perfumed works. Eau d’Hermes (1951) is terrific for its overtness in consideration of the Roudnitska style. The earlier Diorama (1948) and Le Parfum de Therese (~1950s), both Roudnitska, are sumptuously elegant perfumes with a strong injection of spice, fracturing strict categories and introducing ripples of warm tones that both extend and deepen the fragrant pyramid. Diorama has a singing, hovering top note assembled like a trifle of fruit, spice, and funk. Le Parfum de Therese is a green moving into brown, just before rot. It is the spice that mimics the smell of preservation, with the aquatic signature of Therese giving a slick of bodily, metallic disgust as a delightful counterpoint.

And yet it is Eau d’Hermes that is Roudnitska’s truly most overt work of spice and filth – enforcing the raw licentiousness of leather, bitter bergamot, indoles, and dirty lavender with cumin and cinnamon. The clean is secondary and minor – the scent is a well-worn undergarment in a leather bag.

Jean-Claude Ellena is much shyer about it, developing a legible tension of spice against all else. Déclaration (1998) is a textbook classic that always seems to shift back into something demurely animal, formed by an abstract arrangement of spices at the core: cumin, cardamom, and nutmeg, echoing the scratchy texture of atlas cedar. Bigarade Concentree (2003) links itself back to Déclaration as citrus-forward and reduced with a bodily aspect once again from a hint of cedar, some sweaty spices, and the sunny and dry saturation of hay. Épice Marine (2013) is Déclaration revisited, redone with a heightened clarity and an evident greater technical proficiency on Ellena’s end, more appealing to me personally as a seashore context is imposed on it – toastier, crisper, and thinner than Déclaration. Finally, Poivre Samarcande (2004) demonstrates Ellena’s affinity for cedar wood (for some to the point of self-imposed banality, for me, continually refinement) merged with the pungent hum of warming black pepper, cumin, paprika, some oakmoss, and a sweet off-centered exhalation which is a delight to catch.

It is spice that enables such magnificent effects to be achieved in perfumery, adding immense value technically and creatively. It is spice that both draws out and lengthens. In Serge Luten’s Fleurs d’Oranger (2003), the orange blossom is moved to the sultry superlative, finding itself caught in the middle of sweaty and humid weather fumblings, reminiscent of the sweaty overtness of the aforementioned scents with more emphasis on the floral. This is thanks to the dosage of lithe cumin and the surrounding of further white florals. Considered as a whole unit, the scent is pleasantly balmy – luminous in the way orange blossom seems infinitely radiant, with a severe growl around all of its edges. It is a duotone tension at its most obvious and most effective, where one note’s contrasting undertone (orange blossom’s sweatiness) is lifted by the other note (cumin) – thus forming the duo. 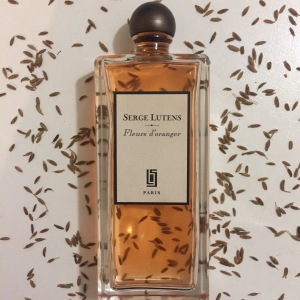 As with all considerations, balance is the vital key to a fragrance’s success. Amouage’s Fate Man (2013) has continued to be troubling since the moment I smelt it three years ago, with its butter chicken curry spices and pencil shavings top – it is immortelle at a point of oversaturation where distinction and clarity begin to suffer, pushed by forceful aromatics of liquorice, ginger, mandarin, and saffron. This softens, but I do not think that balance can come from unbalance. The choice for immortelle is the coarseness and hot sand effect of Annick Goutal’s delectable and sunny Sables (1985), or Serge Luten’s forgotten fragrance El Attarine (2008), which features, in my opinion, a frankly disturbing yet beautifully enigmatic core that moves in waves of quiet indecision, stirred with honey and a core of supple leather that is redolent of osmanthus. It captures a point of cleanliness that if you look deeper it appears dirty, but if you stare at it for too long one realises that it isn’t really clean at all. It is El Attarine’s slowly swirling temperament that is haunting and disturbing, and really, quite simply, very good.

Any discussion of spice and Serge Lutens begs for a discussion of the spiced wood of the Eaux Boisées. Bois Oriental (1992)  manages to merge cedar with spice with a cinnamon emphasis, reading like fizzy sweet Coca-Cola, whilst Féminité du Bois (1992) is an obvious suggestion with its quality of stewed everything, and yet it is Bois de Violette (1992) that makes you think, clashing a sort of melancholy found in impressionistic artworks and music with a phlegmatic character.

Anymore? Like citrus and vanilla notes, spices form an imperative role in perfumes, adding qualities to perfume that alter the shape of its skeleton. It is when the spices are maneuvered to the front that they are most intriguing. 4160 Tuesdays’ Maxed Out (2015) is one of my favourite works from perfumer Sarah McCartney, and is everything you want from spice. Cedar wood and an unusual yet brilliant note of candied cumin that still projects its bodily warmth in a tighter, narrower way, supported with rum, soft tobacco, and vanilla and lifted with the soft suntan kiss of coconut and grassy cannabis – a tropical island clashing with a spice bazaar.

Tom Ford’s London (2013) is in my mind superficially deep – with a big blanket of incense, dirty engine and oud, sliced with cumin, black pepper, cedar, and a lick of saffron. London retracts too quickly and far too softly, and such a bold array needs an equally bold follow through. It is reminiscent of works like the excellent enclosed jungle of Muscs Koublai Khan (Serge Lutens, 1998), Original Musk (Kiehl’s, 1963), Epic Man (Amouage, 2009), and Dior’s Leather Oud (2010), which is more about civet than the leather or the oud, within an intriguingly calm core amongst a frenzied body.

Finally, ELdO’s Eau de Protection (2009) is my favourite rose, for it is a symphony through multiplicity. It’s not just a rose, it’s every rose. She’s filthy, full of black pepper and ginger, and I love it.

4 thoughts on “A Treatise on Spice: Spices in Perfumery”