The dynamic combination of rose and patchouli, in terms of component parts, is perfume at its most simple. This is distinguished from a singular scent, where perfume contrastingly relies on construction – involving more than one part.

The combination of rose and patchouli is easily a case study within the school of perfumery, where two complex materials combine in both accord and discord. While the fresh, crisp aspects of rose move up, the patchouli pulls this celestial quality down to its earthy origins. A classic balancing act, this accord hums a resolved tune whilst cancelling out each other’s unwanted features and effects. The rose is diffusive in nature, and generally speaking effervescent, nuanced with fresh and sweet impressions: linalool, nerol, and geraniol, for instance, are all molecules present in rose which adds sweet tangy qualities. Patchouli is contrastingly dense – a vegetal green with a woody edge and certain alloying features. Considered together it is easy to understand this synergy, where the effect of push and pull results in equilibrium. The tension this combination produces is not lost, as it can still be smelled and identified clearly in a top-down format. Rather, the tension is equalised, and not neutralised.

This simple combination of two complex notes produces an expansive gamut of sensations, from warm, spicy, herbal, exotic, familiar, floral, earthy, woody, all the way to citrusy. Despite this, intricate perfection can become boring (for lack of a better word), discounting technical aspects of concentration, ratio, dosage, etc. The difficulty of rose-patchouli is what to adorn it with because that determines which direction it goes. Balance must firstly be unbalanced through the addition of further materials, and then it must be rebalanced. 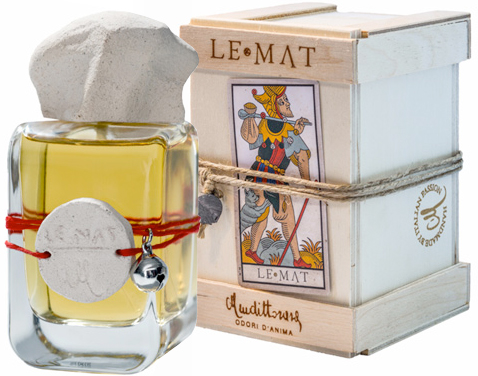 Using rose and patchouli could almost be viewed as a starting point; a blank canvas of sorts with immense backbone. The rose-patchouli in this instance forms a scent of heightened contrast – the rose appears just that bit more celestial; ethereal with gusto. The patchouli is potent and convincing  – earthy and sentinel-like. Le Mat achieves this by turning the duo into an equally dynamic trio with the addition of immortelle.

Immortelle, in this context especially, has a saturating feature delivering immensely diffusive textural qualities to the combination, creating an oily lacquer permeating the structure from inside to out.  With an overtone oscillating between sweet syrup and a burning past the point of caramelisation, this effect is echoed in the top notes of black pepper, nutmeg, and clove – which gives an assertiveness to the immortelle, and a link between it and the earthy patchouli. The dark spices also reiterate a popular rose theme in perfumery: the modernist roses by the likes of Eau de Protection and Rose Poivree, ranging from the sheer to not so sheer spices – capturing a stricter, less-lithe aspect of rose in favour of an immense body through adornment.

Le Mat cannot be categorised this way, for the simple fact that Le Mat wears the wearer in its complexity. However, Le Mat is not a postmodern treatment of roses and such accords either. I cannot help but consider Rose Anonyme by Atelier Cologne, which is indeed postmodern. Yet, Rose Anonyme has a tremendous feeling of unoccupied space, where the transparency gives way to expansive extremes and an unpleasant remoteness; a hollow perfume. Timbuktu is an example of transparency within set borders done well, and Osmanthe Yunnan is equally exemplary in extending this mantra into a limitless capacity. Hence, Le Mat is aptly neoclassical – tweaked and filled with reverberant hums of cashmere woods, geranium, and saturating immortelle.

Each key note in Le Mat’s three-part accord holds an innate complexity – the sort that invites internal reflection.

One thought on “Le Mat by Mendittorosa”