As a self-confessed Jean-Claude Ellena tragic, it is interesting to smell what is considered some of his earlier works, especially observing his transparent style as it grows and develops with confidence – becoming more and more obviously transparent in nature. It becomes apparent that there is a lot of self-referencing to be found: noticing particularly how Ellena produces slight modulation with every new incarnation of the same style. His scents can be classified into thematic genres, continually reflective of his own rigorousness towards producing perfumes of character – often defined by transparency and weightlessness; structurally confident and solid with contents that are minimal and laconic.

Déclaration falls into one of Ellena’s few genres in which I have dubbed the spice-dredged woods. These are defined with a pungent, sizzling spice inflection (cumin in most cases) tamed of their edge; still assertive and diffusive, on a base of woods that are crystalline and transparent. At once heavy and sparse in its substance.

This genre is also most susceptible to being the category which smells the most similar across the board, with often only negligible differences between them. For instance, smelling Angeliques Sous La Pluie (Frederic Malle, 2000) next to Déclaration (Cartier, 1998) reveals that they bare an inextricable Ellena signature of spice-dredged woods. The former is more aromatic, moving towards a medicinal herbal crunch: angelica and juniper being the main culprits. Déclaration in contrast plays with olfactory balance, all at once spicy, woody, and fresh. 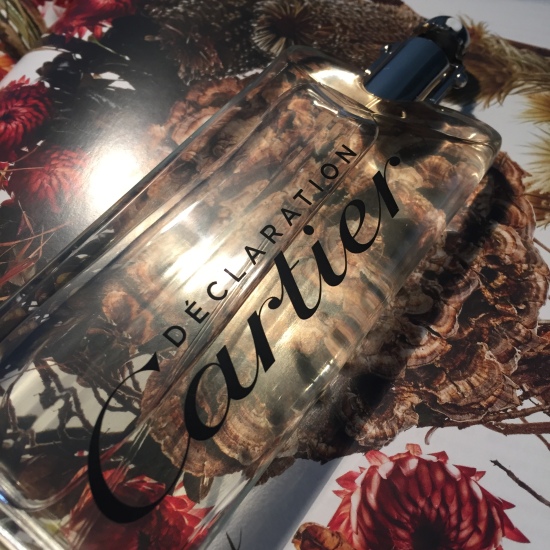 Too complex to confine itself merely to a woody, spiced, citrus, or herbal category – Déclaration instead effortlessly fills the required spaces within all of them, delivering a supremely complex eau, where the notes begin to separate when one focuses their attention on them.

The narrowed cedar profile achieved through Iso E Super within Déclaration creates a frigid delicacy when combined with the cool spice of cardamom, translating itself into crispness tied with wet vegetal spice. The addition of ISO E Super is clever, aiding tremendously in this clarified style of perfume. Woody with impressions of pepper, amber and lime hard candy, Iso E Super as a fixitive allows construction on top of this: further fragrant additions whilst achieving a potent transparency of the base; minimal transitions.

This is a cedar wood base made from stacked sheets of thin glass panes. One can inhale and inspect this fragrance, yet find that it never seems to stop at a base or offer a sense of resonance. That’s not to say this fragrance has a never-ending quality, in that it is not a scent encased in a clear sense of structure, because it is. Rather, Déclaration is like smelling a möbius strip: top, middle, bottom, top, middle, bottom, in an endless cycle – painstakingly exhilarated through clarity, and not at once blurred as that suggests unclarity, but rather, clean and seamless.

Déclaration is lucid and gaseous, spreading itself generously all over the confines of its structure and reaching its very limits (for an Ellena work without apparent limits, visit Osmanthe Yunnan, 2004). Within this, luminous bitter orange is paired with cumin, an Ellena hallmark (Cologne Bigarade, 2001; Terre d’Hermes Eau Tres Fraiche, 2014), however here it is fused with a strong sense of floralcy and a stronger current of warm, pastel spices – ginger, coriander seed, leather, tea, neroli, cinnamon.

Whilst appearing to be stylistically minimal, Déclaration is quite complex; a fluid belonging to the 1990s camp of fragrance defined by refined construction and an attempt to champion the ozonic oceanic styles fixated with opacity and musks, instead turning to loaded fragrances surged with minimalistic styling: dusky, transparent, clean.