The postmodern chypre moves away from the great drama of the classical chypre. I am cautious not to associate classical mossy chypres with maximalism. Instead, I refer to them as works of great drama. Defined with equipoise and infinite competing forces normalising on the skin, revealing interesting modulations as time progresses. Take the benchmark Mitsouko and consider the olfactory pyramid from head, heart, and then finally to the base. In the typical scenario with the typical fragrance, the top comes through initially most strongly, moving continually down until the warm balsamic notes and accords are left.

The classical chypre however is considerably less rigidly defined by this structure, mutating the olfactory triangle into what is more aptly an olfactory sphere: starting from the outmost circumference blending deeper into the diameter. Pure chypres such as Mitsouko and Pour Monsieur demonstrate this clearly. But even beyond that, Guerlain’s Vol de Nuit, the chypre with woody and dark green intensities shows a similar structure of less rigidity and far more flexibility by the way of blurred edges. It just happens to be that the brisk features that makes Vol de Nuit so venerable alter our circular structure lightly. Another: Paloma Picasso’s eponymous fragrance amps up the animal and the severity though floralcy. On top of the circle exists polished heapings of civet, castoreum, carnation, and further carnal flowers.

What is seen is reinvented classicism which forms modernism. If Pour Monsieur is classical, then Antaeus’ intense gravity forms a chypre within modernist standards. A strong dosage of castoreum, for masculinity’s sake. Heighten the base of labdanum to achieve severity at a point of immediacy. Drown the rose in testosterone. Add permeations of woods and spice all over the structure. Whilst this mutates the classical structure adequately to qualify it for modernist labelling, it does not render it imperceptible, nor does it damage the textural-structural thread that makes it a chypre.

What then qualifies Nasomatto’s China White as a postmodern chypre involves a contradiction of modernism. If modernism involves reinvention through dosage, altered structure, and changing the chypre by putting it on the verge of being able to defined it as a chypre, rather than a new olfactory family in itself, then movements in postmodernism and the postmodern chypre directly contradicts by adding unique qualities of clarity. Antaeus is sure of itself. Clearly defined, masculine, and arguably trapped within a time period. China White has edges that are equally defined, but achieves so in a new manner. 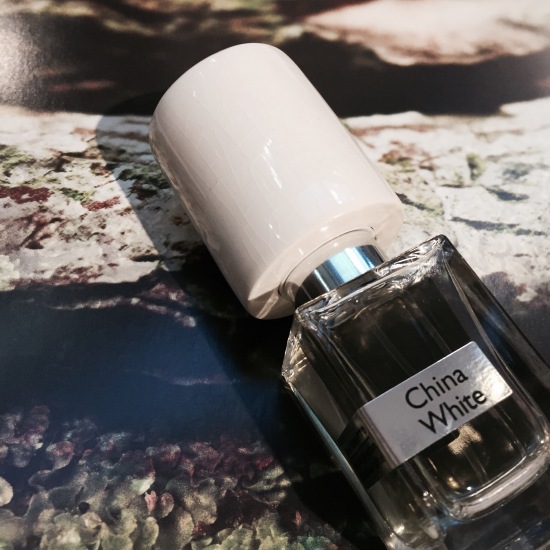 China White is a style of chypre that requires a “c’est une chypre!” revelation. It is a dense work – a concentrated ball within a minimalist style; a fragrance with a centre of energy washed in a strong surrounding of whites and greys. It is not a complex or baroque work either, rather, it employs a unique mix of synthetics that blurs the natural references of the fragrance. It is nebulous, spreading on the skin with an interplay of bitter and sweet.

I am cautious to use the minimalist labelling, as perfumer Gualtieri is maximalist at its maximal. He achieves a certain abstract expressionist feature to his works – somewhere within the midst of heavy handed, high dosage, and a style where the smells seem to bounce back. This style, maximal and abstract, allows monolithic fragrant artworks to be constructed. China White reverses this template style – delivering monolithic in glass, and something more conceptual, more sinking and textural, and brutish in favour of the cerebral (there are cerebral elements, however). This achieves olfactory illusionism: wafer thin at one angle and dense at another. An augmented spherical structure. This style of minimalism isn’t constructivist in that it builds upwards with an attitude towards minimalism, but rather reductive where the form is reduced until no more accoutrements exist and legibility of the chypre is all that remains in black and white.

To then clarify this with gossamer effects is where the postmodern begins and the modern ends.

With remarkable restraint, China White has a quality of anticipation that never resolves. Its dustiness reveals nothing, its suede and velvet-like texture goes nowhere. Instead, the monolith of this fragrance is an arid ambroxan and leather block, not so much the scent of desiccation, but damp and mossy – this is where I had my ‘aha’ moment. Whilst this has been criticised earlier (see: Plushness and The Synthetic Construction), the static construction works here because that very construction serves an integral part of the chypre structure and its confines: the astringent bounce of oakmoss effects and leather, dancing around bitter green herbs giving an unctuous verdant slick, the odd fruitiness of pear and peach with a hint of strawberry, a cold metallic flourish of powders, taut cedar, possibly osmanthus (which would nicely tie the link between leather and peach), and violet imbuing warmth. Together – China White is a uniquely dusty work reminiscent of a chypre with a prominent leathery backbone, and an aldehydic transparency with apparent opaque outlines through synthetics which have been wrangled into submission. This dries down to a tobacco of the hot breath sort; smelled secondhand and almost stale.

This postmodern chypre has infinite intersections which don’t form contrast, but rather blend into a singular rendition – like listening to Brian Eno on heroin: shallow, pleasurable, and ultimately meaningless (see: Textures and Ambient 1: Music for Airports).

A particularly meritorious work – simple and clean yet entirely brazenly artistic, and for the kind of individual that wears aluminium hats out of paranoia.

One thought on “China White by Nasomatto: Postmodern Chypre”