Density within a perfume seems like an odd idea, but compositions between different perfumers have a different sense of weight to them. Giacobetti, to me, is a master of contrasts, juxtaposition, and the oxymoronic.

In reference to her other L’Artisan works, Tea for Two plays with ideas of varying mass in perfume. Her Fou d’Absinthe (my first L’Artisan love) dances around cool and hot; a meditation of the fougere styling done differently with the typical L’Artisan gourmand tinge. It takes warm woods and crosses it with a cool anisic rush of enchanting, sauvage absinthe. A verdant interplay with varying flecks of green. She intellectually studies the fougere styling, and then produces a product that plays ode to it, whilst exuding a confidence to it and a revived breath of fresh air.

Tea for Two has its parts layered excellently – all with profound clarity. Giacobetti demonstrates her confidence towards the archetypal dense woody oriental. She performs this simply, by adding a profound sense of space between the notes; typified by the mantra that the rules must firstly be understood before they can be augmented and broken.

Giacobetti via Tea for Two has constructed the modern oriental. The ambery vanillic weightiness is not gone in its entirety, but remains as prevalent shadows throughout the layered composition. The spices are speckled with a teasing effect of freshness done differently. Citrus, neroli, and ginger notes create an effect of aromatic black tea. A lot goes on in Tea for Two – a layering of masses and styles that can be appreciated simply and one at a time, or as an overall scent: a firm tea fragrance with a rhythmic tango of articulate flourishes and mystifying smoke. 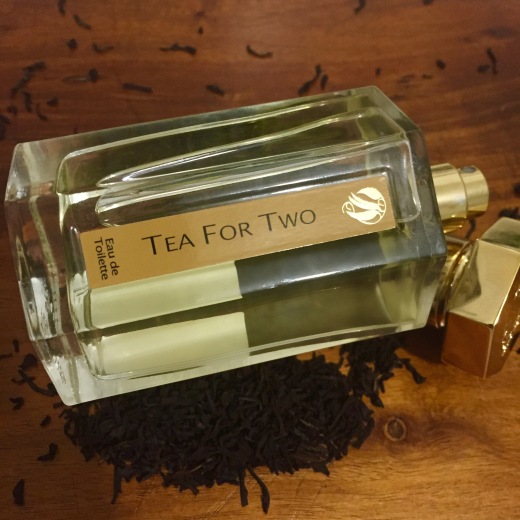 Tea for Two has an immensely rewarding opening. An ephemeral gust of neroli and bergamot to call to mind tea then scented with a high-pitched citrus-pith twang. Earl Grey immediately comes to mind. Gentian is used for its rooty, earthy, and dusty quality, like the smell of old dried tea in dark metal canisters at the back of cupboards. The opening relies on redolence yet swaps the citrus opening that is typical of an oriental and uses a different agent to create an idea of freshness. In this case, a series of highly aromatic flowers, a spiked ginger note, and a low undertone of bergamot rind.

A wave of tobacco smoke rolls into the composition mimicking smoked lapsang tea, but indirectly cuts this gourmand atmosphere. The smoke is thick and dense, and recalls trails of cigarette smoke at times, floating well atop of the aromatics and the tea notes. A delightful acrid quality is found in Tea for Two – always present but never revealing. It recalls over-brewed black tea and its tannic edge, or luxurious Orange Pekoe with its innate tannic quality giving an ambery and brisk finish.

Whilst this occurs, delightfully singular spice notes make an appearance. Ginger is most penetrating, existing somewhere between spice and a clarifying ‘fresh’ note. Cinnamon pairs naturally and rather nicely too, built up further with star anise and cardamon to create a warming sensation of chai tea.

The beauty of Tea for Two exists on the skin, and it reveals a milky aspect. The piercing albeit pleasant spice notes gain a curvaceous style, smoothed and polished, and sweetened finally with an unctuous note of vanilla and a honey accord. This is all allayed and rounded further with a firm woodiness. Tea for Two is a broad tea scent, covering many unique styles.

This scent may not be complex in a covert manner, given it does not require much scrutiny to understand (the notes are not hidden, as everything appears to be elucidated in Tea for Two), but it is something immediately understood and speaks to the most common vernacular. An idea of comfort. An idea of home. Orientals seem to do this naturally by association, but Giacobetti takes a largely broad association and pushes it to the very front, teetering between hyperreal gourmand and a sensible and asture woody tea scent. From this, Tea for Two is a luxurious recall to comfort and concurrently an intellectual mediation of the woody oriental family. Giacobetti gives us object lessons in perfumery through the very perfume she creates with her trademark distinction through contrast. Hot, cold. Wet, dry. But most importantly, lucid and always cogent.

3 thoughts on “Tea for Two by L’Artisan Parfumeur”