Cologne Indelebile’s popularity came from its novelty, a lasting cologne. For many, the benefit of a lasting cologne derived from a more functional desire than a pleasurable one. Cologne is something I celebrate for its fleeting nature and its pick-me-up qualities like a black coffee. Doused onto the bare body and through the hair for a refreshing slap in the morning, in the sun, before bed, after a wash, after exercise … basically whenever. Ceremoniously, one doesn’t wear cologne to go out. You wear it for your own short moment of enjoyment.

Cologne Indelebile modifies that idea. A couple of sprays and you are set for the entire day. No need to reapply, and no need to pour into cupped hands and rubbed all over – that would be terribly foolish, and surprisingly thick. What distinguishes this cologne from other colognes on the market is its thickness. It’s a cologne under the guise of an eau de parfum, done before in Tom Ford’s Neroli Portofino. The musk, functional at best, is an adhesive note in this fragrance alloying down the freshness … indelibly.

But considering this, a functional cologne fills a void in the market. Not everyone wants to wear orientals, and the working crowd in summer may find florals cloying and darker fragrances too loaded and sticky. Working professionals need to smell good, we should all smell good, and sometimes reapplying every hour becomes a nuisance for some. So – if I separate cologne from its promise of transience but retainment of freshness Dominique Ropion has made a good cologne … a very good cologne indeed. 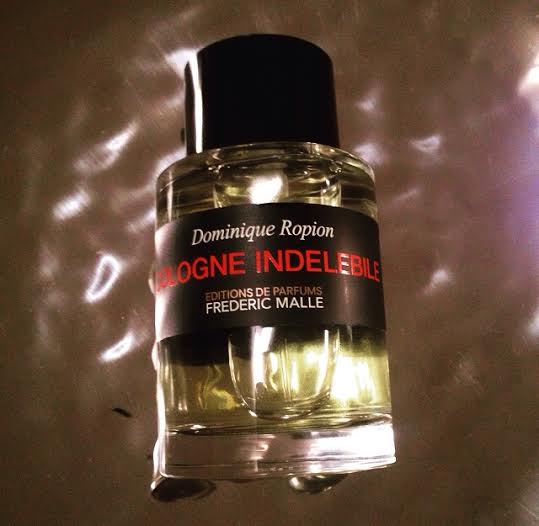 I am pleased that Ropion was given the task at making a cologne. Ropion just does things right. His entire series of creations from the Malle lineup are all contemporary masterpieces – with something available to please everyone. In this instance, Cologne Indelebile appeals to the classic sentimentalists. Take the oldest style of fragrance, insert ‘technical musks’ (a phrase used by Malle, otherwise mentioned earlier as ‘functional musks’) into its DNA and witness the cologne genre being propelled into contemporary relevance and wearability.

Balancing classic style, this fragrance at first recalls the neroli and lemon opening of the classic 4711. Jolting the eyes open, whipping the head back, the lemon and bergamot is vivacious and modern in its voracity and its gloriously cutting sharpness.

This cologne, as with any other cologne, is best scrutinised lightly because deep inspection will lead you no where. The only instance of a cologne begging deep inspection are colognes that push the envelope and tweak classicism. Tom Ford’s Rive D’Ambre, ELDO’s Cologne, Eau de Guerlain, Thierry Mugler’s Cologne, Cologne Bigarade by Malle, and Eau de Fleurs de Cedrat by Guerlain, for instance, are certainly not classic colognes. They shift and alter on a close tangent to the orthodox style. Cologne Indelebile however retains the already perfected cologne formula – where neroli, orange blossom, and spikes of citrus are immutable permanents of the formula. This is then tickled with a dried herb accord as one would expect, and musk musk musk is added with a slightly watery backdrop of florals to ensure permanence.

At times, I find a warmth rising around the edges of this fragrance, sometimes appearing metallic, and sometimes green and largely floral. As already mentioned by other fragrance bloggers, there’s a steamy note found in this cologne, much like the green ‘steamed laundry’ accord of Mugler’s Cologne. The best part despite its metallic presence at times, or its thick muskiness, is that it always appears surreally natural – as a cologne should.

What more could you ask for?

Thick Cologne. A lesson in the style of the genre.