I will start this review with a question and an anecdote: Do we love classics because we have to?

Some fragrances present themselves as a rite of passage in the perfume world. It’s a bit like an individual’s first legal beer or oyster served au naturel. I recall my twee sentiment for oysters. Pinch the nose; no chewing whatsoever … Drench with lemon, swallow, repeat. I didn’t like them per se, but I approached them initially with a little bit of caution because I knew I’d have to have several more before I became completely enamoured with them.

Appropriately, do I utter that Shalimar is the best oriental because of its luxuriously rich history? Do I really think Mitsouko is the greatest perfume ever? If you were to have given me Shalimar three years ago my answer would be incredibly different from what it is today. Despite that, the answer to both of those questions don’t matter. People are expected to love certain things just because. If you like England you might have to (but don’t have to) love tea. If you love France you might have to (but don’t have to) love escargot. If you love perfume you might have to love Shalimar, and Mitsouko, and Vetiver… Not because they are great, but because they are historically important. Nowadays, many fragrances shine way past their influences or novel creations.

I refrain from saying Vetiver is the greatest vetiver fragrance in existence, but rather, it was. The likes of Guerlain are particularly notable for creating fragrances the serve as reference, and Vetiver is the reference vetiver. People can get too hellbent on following the bandwagon. Not me. 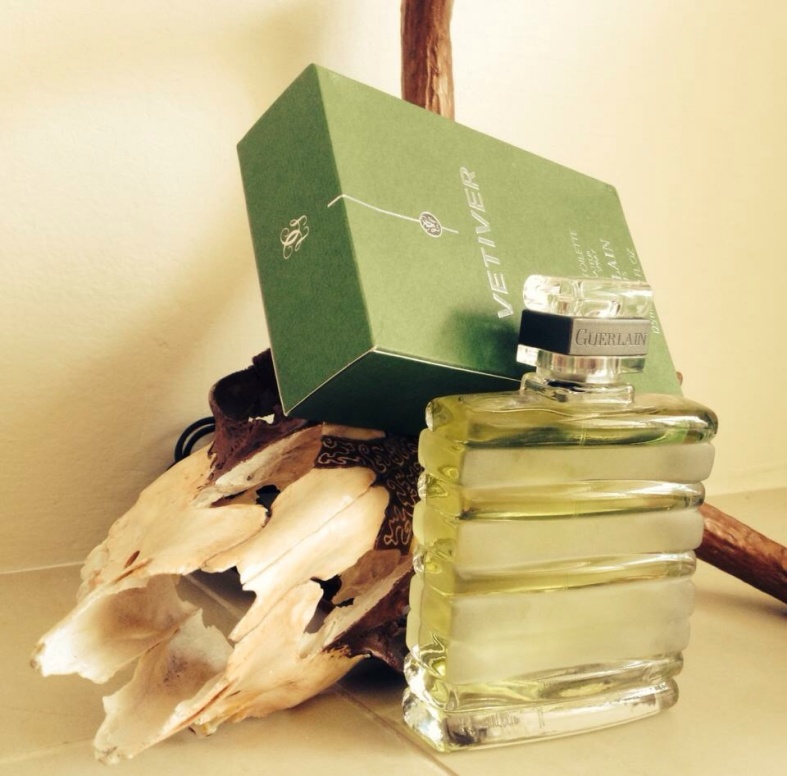 On the spectrum of vetivers, Guerlain’s Vetiver falls smack bang in the middle. Vetiver falls into its marvellous position as reference through its perfect balance. Left of this spectrum falls the clean and clear types, such as Tom Ford’s Grey Vetiver and the less clean (yet flinty) Terre D’Hermès. On the right of this spectrum comes the blanket of thick smoke and bold ingredients, calling to mind Sycomore by Chanel and Encre Noire by Lalique. Notice the scale is dictated by how Vetiver by Guerlain presents itself: clean, masculine, strong (and how others compare).

Vetiver by Guerlain blurred the vetiver conventions creating an abstract fragrance, highlighting a swirling darkness against an angular rooty grip. It smells classic, as a revivified lemon opens, with a peppery tobacco note swirling around the predominant root note of vetiver. Can dirt be clean? This smells of rich fertile soil dampened with crisp rainwater. Like rich green grass seen through a misty glaze, then eventually cut by warm crepuscular rays from the sun. Our opening accord is dispersive and wet, matured with a base of vetiver and spice. This is unfussy; lax unlike much of Guerlain’s uptight feminine works. It is a still and tranquil piece of work as it is neither overly rough or overly smooth. It is merely balanced masterfully.

Here, the light and shade qualities in this fragrance are very smooth and relaxed; coming down to the simplicity of the notes and their obvious presence. Jean-Paul Guerlain analyses the fragrant profile of vetiver (be it an isolate of it or the complete absolute) and uses other ingredients in propriety. The citruses (lemon, bergamot, neroli) are used to amplify the clean facets of vetiver, as the tobacco and coriander seed is added to emphasis the earthy, almost tar-like and greasy smokiness. Smell slowly with care and you might find legumes and tonka bean, serving as a bridge for vetiver’s innate nutty characters (made popular in Vetiver Tonka by Hermès). Here we shift from a heavy main material of vetiver, to multiple and different ephemeral stages of bliss.

Effortlessly solid and dependable, Guerlain’s Vetiver is the sort of abstraction that made Jean-Paul Guerlain a heavy-hitting perfumer, swapping powdery complex dreams (made famous by prior Guerlain perfumers, notably Jacques) for clear realities with a touch of mysticism. Regardless, on a critical level this is a linear perfume, spiced slowly and worn in with a dry cedar. The unctuousness of the vetiver ingredient is made refined, somewhat mellow in its progression; and yet despite this, it feels eternally thin, lacking a few features that cause great desire tuned for nowadays tastes.

Compare this to Vetiver Extraordinare from Malle, Sycomore (Chanel), or Terre D’Hermès and notice how this is the precursor. We have this to thank as it paved the way for the new contemporary masterpieces.

An eternal masterpiece, a reference (but not a museum) piece.

6 thoughts on “Vetiver by Guerlain”