This review, as with all reviews really, is dedicated to Connie. In one respect, she is my source for effortless intellectual rigour, but on the other hand, she keeps me in check. My rock, my weight, and my inspiration – I wouldn’t be in this position without you. I thank-you perpetually with all the linguistic and emotional gusto I can muster. My success is your success too. – P.P.

I find that naturally with expertise comes a diminutive sense of haughtiness. I wish this wasn’t the case, but nevertheless it just happens. I can’t be the only perfume enthusiast who turns their head at the scents worn by all, or more ignominiously put, by the common fodder  – One Million, my go to mass-market fragrance for elucidating such a point, is a notorious scent often used to describe everything I don’t want to smell like. Common, derivative, generic – these words complete my vernacular when describing such a fragrance.

Even when I eventually approached such a prestigious lineup of fragrances such as Editions de Parfums from Frederic Malle, I inadvertently turned my head away from Musc Ravageur, Carnal Flower, and Portrait of a Lady because everyone apparently wore them. For instance, I remember one Saturday I was exploring the Malle segment of a store and an older lady wedged between me to generously douse on herself, spray upon spray, of Portrait of a Lady. “This is the best one” she said, and scuttled out of the store quickly, leaving me in a rather vexed state. “No, Dans Tes Bras is the best (because I said so)”. I analysed Portrait of a Lady from the bottle quickly with an impertinent lack of care. “Oh, it’s a rose.” I sighed out, and returned to the less popular fragrances.

So then, what happened between then and now for me to say that Portrait of a Lady is amongst my favourite fragrances? Courage, and to remove all external factors of market popularity.

Portrait of a Lady for me ticked all of the boxes that Malle himself asked his consumers. In his famous book ‘On Perfume Making’, Malle asks the following:

No series of questions can answer the broader conundrum of what makes a perfume ‘good’ or ‘great’, but what Malle has done proves that the contradictions we find in most masterful works obviously attribute. In fragrance, I find when one looks for richness they immediately want to cut through it to give delicacy. They want innocence with a twist, or alternatively dark fragrances with tinges of luminescence.  Portrait of a Lady, created by the outstanding Ropion, evolves like sharp poetry on the skin. It is not shy, but it is tempered adequately. It is contrast at its best. 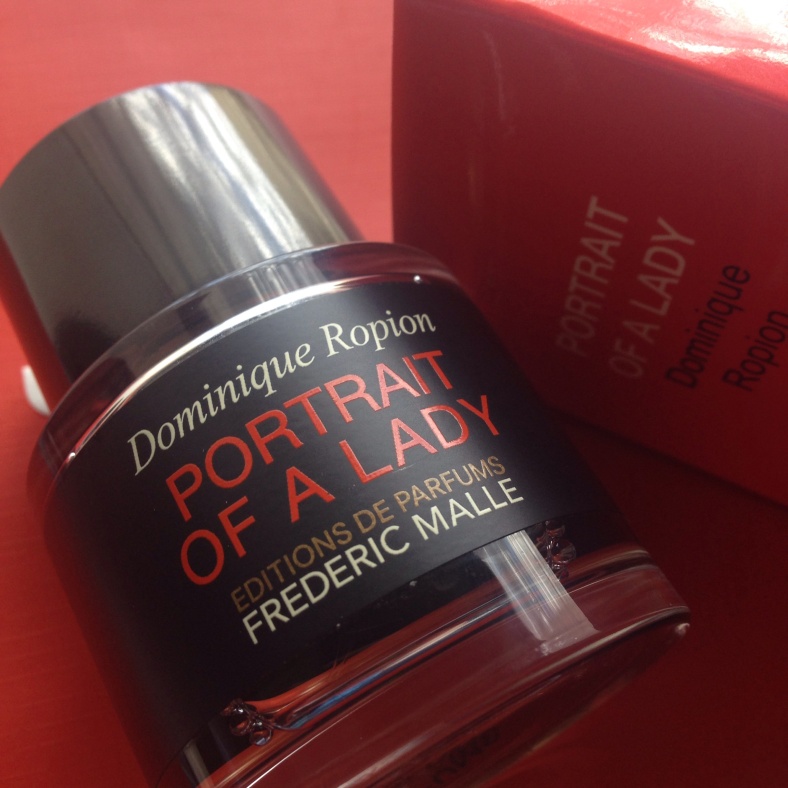 This is the orientalist’s rose, opening red-hot and spicy with an unmistakeable pepper and clove note. This note is exaggerated as it contrasts wonderfully with the vegetal top notes, appearing loosely wet and cushioned with an edible sweetness – blowing both cool and hot. On skin, the spice is muted in favour of deep fruity currants and raspberry; juxtaposed against a smoked note of incense and dirty, earthy patchouli. A lot happens in the opening, as if all notes are introduced and then appear later on. This is Dominique Ropion’s signature, rooted strongly in classical French perfumery favouring overloading instead of obvious vacant space. The spice here is intense, complimented by sweetness and given some middle ground through dry cinnamon, like sunlight in the desert.

The combination of rawness and the fragrance’s overall sharp angularness is much like a thorny rose – a beautiful flower that can be appreciated but not grasped. Despite that – it is magnetic, attracting many and inviting them to smell. Creamy notes of sandalwood and patchouli give decadence, whilst I find the very oriental notes of spice, incense, amber and a crystalline oud give romanticism and a palpable velvety plushness, hiding an unhurried sexiness.

Portrait of a Lady is lush because it is complex, touching all facets of the fragrant spectrum. It is delicious, and lusciously overdosed with Turkish rose absolute. This fragrance is symphonic in its progression, yet forever baroque in nature due to its redolence of yesteryear desirability and heavy use of the most feminine of essences – rose. This fragrance at times recalls exotica, again with oriental notes, such as benzoin and frankincense dosed against the rose absolute, lifting it and glamourising it.

It dries down to a glossy quality, with an opposing dry yet balsamic quality calling to mind the dry and withered woods notes of many dramatic chypre works, whilst on the other hand patchouli acts as a buffer against the crisp chocolatey rose & oud combination. Nevertheless, whilst Portrait of a Lady is bittersweet on the skin, its sillage comes across as inky and carnal – with incense smoke growing perpetually. Darker and darker.

What Portrait of a Lady does on my skin is quite a lot. It evolves dramatically, eventually showcasing a sharp turn from oriental to chypre, with each facet still equally important as the other, this is then balanced, tempered and rounded with multiples of smoke, a milky sandalwood and compote-based sweetness, and a toothsome and malleable turkish delight accord.

A deep shade of pink for all, a spiced floriental of superlative quality.

5 thoughts on “Portrait of a Lady for Frederic Malle”