A light, bright and sparkling fragrance, Terre D’Hermès Eau Tres Fraiche is just one of those summer flankers that you want to douse yourself in and embrace others with your fragrant presence. Literally translating to “Land of Hermès/Earth – Very Fresh Water”; one sniff and you shall see why. 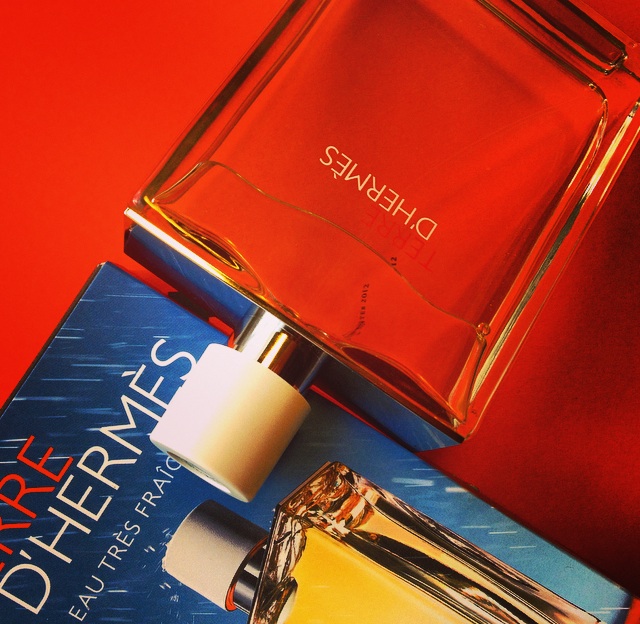 Some say it’s orange, some say mandarin; others say it’s tangerine and some say grapefruit. I’m just going to call it the ‘bitter orange accord’. A delightfully fresh citrus; Terre D’Hermès ETF is a dialogue between bitter orange and woody notes and a clash between the solidity of earth and the freedom of citrus.

For those unaware, this new fragrance (2014) derives from the original Terre D’Hermès (2006) – my first Hermès purchase in the fragrance field (mind you – I was well accustomed to their ties). Both share very common features but of course, are still nothing alike. If we were to draw a parallel to a well made gin and tonic, the original Terre D’Hermès would be the tonic water – dry and bitter; and Eau Tres Fraiche being juniper based gin and perhaps a wedge of citrus for good measure- refreshing, revitalising and sensually awakening.

The original fragrance was, and still is, earth shattering. The overall flint accord was a novel idea in fragrance and presented a new scent-profile under the umbrella term for ‘dry’. In Eau Tres Fraiche, some of the flinty aspects still exist. The bitter citrus opening, which is always crisp, yet still perpetually bitter is combined with these flinty aspects to create some rather cheery notes. The smell of freshly chlorinated pools (stemming from the original) is toned downed in favour for a really green and damp scent of dry earth touched by muggy rainwater – hence creating the illusion of freshly turned and fertile soil.

Anything but generic (because you and I both know how many citrus fragrances there are out there), Eau Tres Fraiche is just overall supremely refreshing. It’s almost as if Terre D’Hermès was diluted with river water and freshly squeezed grapefruit juice. The clean aroma and straightforward citrus notes creates an inviting and youthful appeal; the gentlest touch of woodsy, cedar-smelling ISO-E Super (A synthetic molecule that smells like cedarwood – it acts like MSG to food. It also gives a velvety, ‘worn-in’ feel to fragrances) made popular in Terre D’Hermès Pure Parfum is still present – and gives this fragrance something to stand on. The sweet and lemony floral aroma of geranium gives lightness , whilst cardamom creates a contrapuntal sharpness and a level of gravitas ensuring the citruses in Eau Tres Fraiche are never fleeting.

Finally, there are some aquatic elements present (what’s up with me and aquatics lately?!); yet I will state that it would be much more appropriate to call this watery, rather than aquatic. The watery elements give the fragrance a sense of moistness – which in text form may seem impossible, but there is never a glimmer of powder; only a sense of humidity or non-dryness. A watery fragrance is obviously less heavy, lighter, but considering this, the lightness itself presents a complex confound – how can something smell light? Citruses? More solvent? Lack of orris root (the notorious powder note)?

A word of advice, the real complexity of this fragrance is experienced on the skin. You start to uncover the secrets of its beauty. The ISO-E molecule reacts with everyone’s skin differently and to the wearer this is imperceivable. Whilst this may be very citric at the start and could be dubbed an ‘energising tonic’, with time, the fragrance and the citrus mellows and a woody crispness with a bit more heaviness is obtained. It’s an undeniable feeling of cuddly-ness and embrace. From citruses to lemony florals and crisp woods. The fragrance stays close to the skin; yet it concurrently has its own exciting character.

A masterpiece in the citrus/watery-field of fragrances. The overall projection and longevity is just right. Mandatory for summer.