My bottle of Brin de Réglisse (Hermès 2004) is by and large, empty. I’m saving those final squirts – but I do spritz it every so often. It is at once my reference for good perfume, and a key to my personal history, down the sentimental tunnel of time past. I breathe in its immediate bitter herbal aroma of liquorice, thrown and slightly off-centered with its essential gourmand aspects but empty of overt saccharine qualities, dry with the agrestic breeze of hay, conjoined with the softest note of something coffee-like: with its roasted, rich swirls, and its gentle amiable drop of orange blossom. This is all brought together with lavender, in all of its adaptability, here showing off its gentle and natural olfactory purity – like its clean and clear uses in aromatherapy, as opposed to that typical fougere haze it’s often subjected to. It has been kissed and roasted gently by the sun, presenting dryness in a surprisingly fresh register, altogether with complimentary herbal-anisic-floral undertones that picks up the entire span top-to-bottom of Brin de Réglisse’s composition. 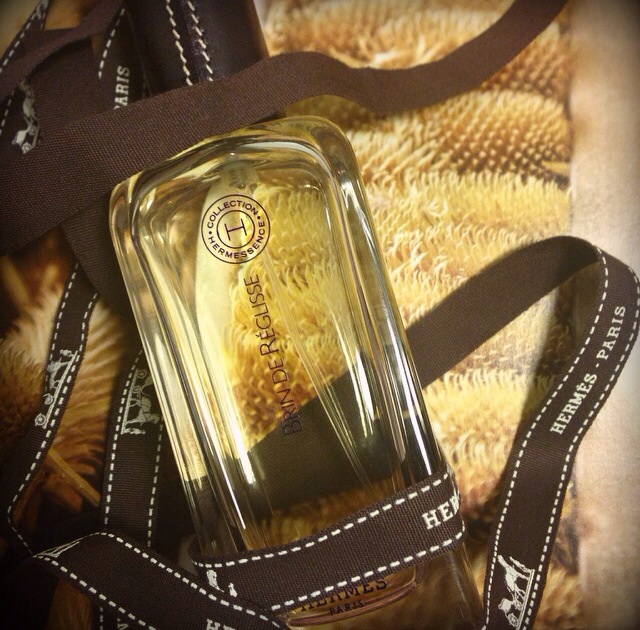 I smell all of this now, and I remember June 14 2014. It was raining that day, and I was wearing a black woolen tie. It was a Saturday – an innocent Saturday. I had every intention to purchase Poivre Samarcande after obsessing over it for months, but Brin de Réglisse was handed to me on a whim, and I was immediately enthralled by these aforementioned qualities that I could not define nor precisely specify. Poivre had lost its desirable glow, and it transferred entirely over to Brin de Réglisse. And unlike Poivre, I did not have to think about it in any reflective sense – it just woke me up, stirring me in a gentle violence. The fragrance adhered to all of my idiosyncratic sensibilities in a moment of absolute harmony. It is a peculiar event – the thing that I investigated the least, only in that one chance instance, without knowing what its name meant, or its ingredients, or its general style, had taken possession of me, and had exceeded all of the other scents that I had contrastingly investigated and intended to so deeply. That very evening I started this blog and wrote about this fragrance – I had to expend all of this creative and inspired energy that had generated from within me.

Isn’t it peculiar that this mysterious thing continues to be my source of undeniable comfort, and my paragon against much else (to say all else would deny my own aesthetic system; my reviewing modus operandi – I won’t go that far; I refuse). It is in reflection, six years later, at the bottom of this bottle with a skerrick left, that I am reminded of this very revelation on that joyous day – and it thrusts me into a position to reconsider all that I value, and how that I value. Reviewing is a taxing practice, and I am reminded ad nauseam from all over that employing purely literal descriptions is a complete injustice to the practice – it will only get us so far, because it reduces the experience of good perfume (in all of its salubriousness, affectiveness, and its soul-touching powers) to one dimension of existence. It obliterates the perceiving subject and annihilates the wondrous open ambiguity of experience. In this style of disclosure, it closes the multitudinal avenues for curious exploration, and leaves us with one and only one to venture out onto.

And this is the approach that I have observed by individuals who themselves are bemused by the explosion of static noise produced by just about anyone and everyone who self-qualify themselves as valid reviewers, who comment anything that comes to mind, without no appreciation for a work’s aesthetic merits. I share this frustration, naturally, but in observing these bemused and unimpressed individuals, I too observe them falling down into the ugly den of strict empiricism (science and molecules above all else), dens that they consider for themselves to be lofty marble chambers; ivory towers which look down upon those who are feeling their perfume, and not thinking (about) it.

I admit, there was a previous iteration of myself who had the very same tendency to criticise blithely, but I kept on investigating, and instead of rage sublimating into an expression of public dissatisfaction and scorn, I fell silent to avoid hurting myself and others. I could not provide an answer to this crucial tension between sensing and judging that had gone so far to stop me from reviewing to my own high level of satisfaction – I disappeared for a while, disconnecting from public engagement. I became disenchanted with what qualified as reviewing from both sides of the spectrum: the thinkers who coldly dissected and dissected until there was nothing left but a hollow shell of perfume, and the feelers who believed that their feelings were adequate in the absence of careful consideration and justification, jumping erroneously from assertion to argument without first building a secure bridge to get themselves there.

The result not only was a newfound perspective of the world and its rich sensory-aesthetic layer, but a 10,000+ word manifesto that has my heart on the page, stained with a melange of blood, sweat, and tears. It takes wine as its subject, because the related literature was abundant, but what this manifesto says applies to virtually anything that we can experience aesthetically (which, extracting the basic message from Dewey, is anything: from varieties of honey, good conversations, fine wine, and excellent perfumes). An aesthetic experience refers to that very same magic that I felt smelling Brin de Réglisse – that synergistic energy that is awakened from within and connects me to something ineffably deep and enchanting; that energy which motivates, inspires, woos, and shoots straight into the heart and the pleasure receptors, before it then travels onto the plane of judgement and the critical faculties that indeed improve the experience. Here is not the place to discuss the content of my thesis, but I firmly believe that it will be apparent in my style and reflected in my approach.

I’m 22 now, and I started this journey at 16. To not have learned something (or a lot of things) during this time is ludicrous. I am happy to have made what I believe is a big step in the (very) right direction in the realm of criticism and aesthetics. I think about my critical period: the first step made on this unending investigative journey started with Susan Sontag. She wants us to feel instead of thinking: “[i]n place of a hermeneutics we need an erotics of art”, she said in 1964. I say, in reply: we need both.

One thought on “Six Years In: Thoughts Stemming From an Empty Bottle of Brin de Réglisse”