Múnegu is the sort of fragrance that sets up a distinction between two sorts: those who know fragrance, and those who simply wear the stuff. It reminds me of my first experience with both Guerlain’s Vetiver and Chanel’s Cuir de Russie. The former appeared to me as a fairly direct smoky grassy lemon scent, and the latter as an expensive powder with a warm blushing glow about it, and that’s about it. I think about these two scents now, and clearly there is much more to both of these. And when I approach them again today, I can’t help but think about everything else that I’ve missed in the fragrances that I have encountered, and supposedly know already.

Why do I speak of these instances? Because I can imagine Múnegu presenting the same upfront simplicity as these two scents. Múnegu is tight, and it needs deciphering, and deciphering is a skill. There’s plenty to this fragrance, but it is undeniably a combination of considerably nice cedar and lightly sweaty cumin, avoiding that wholly warm armpit aroma by injecting orange citrus, which in its pomander-like state, is the perfect sponge: it both cleans and absorbs. We have seen this before: Ellena does this to an impressive extent in Cologne Bigarade and Declaration, but whilst these two works appear to lack a sense of weight, Múnegu has a detectable sense of weight that is concentrated at its core.

Notice the texture of this work. It’s a bit rugged, that’s apt, like a snag in some dusky coloured linen, but in its weighted middle Múnegu is buttery, velvet-like, and quite warm. It feels damp and worn in, and it smells it too – and when this is realised, it becomes clear that it is ylang ylang and patchouli in the heart, all unctuous and textural, with its saturation heightened via a considered dosage of fresh rose geranium and cardamom, airing out the scent, whilst an impression of dried fruits add a curious counterpoint.

It is this tension that marks exquisite perfumery, and Nishane has done their homework in technique here: it’s an example of a textbook fresh spice with an oily floral twist that reaches out towards exotica, surrounded in hues of great colour. And when an assortment of notes manages to smell coherent and unified, we are definitely onto something worthwhile, that is, something worth wearing and something worth thinking about. And when those two qualities converge, you’ve surely arrived somewhere good. 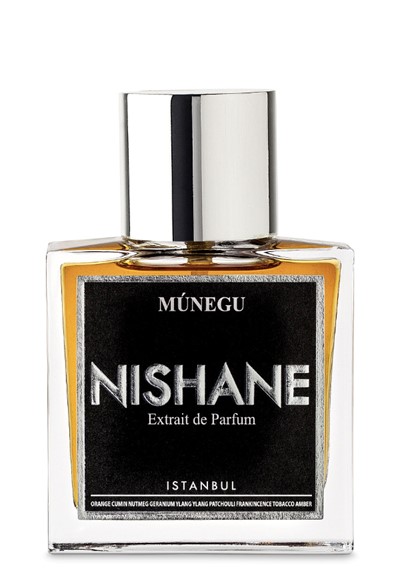 Pachulí Kozha is a honey and amber patchouli that pivots around many patchouli tropes. Its toffee-like soft-centered core is delicately engulfed in a fantasy of smoke and tobacco without ever feeling excessive or lush. That makes this scent quite polite, with a pretty background of fruit and florals. Whilst there are temptations at times to ask for more from this fragrance, I think that’s a bit greedy, for what more do you want from a patchouli until it begins to wear you? Above all else there is respect for the ingredient, for after all, it is the main attraction as the eponymous note.

In all of its balsamic lashings – its sticky delightful chew – Pachulí Kozha never compromises on its patchouli-ness. What do I mean? It has balance, and amidst its ornamental, arabesque structure, patchouli is the centralising concept, reminding us of this fact without shouting nor whispering it. It’s the perfect tepid temperature; a hushed inside voice type of fragrance. It is ever so slightly more than a singular note fragrance, masterful in the way that it avoids becoming far too much. It is this quality of balance that earns this scent praise, and, in a strange kind of way, makes me struggle to put it into words. You could treat this scent as a fruity tobacco (thank chamomile, employed here and giving tinges of apple, honey, and dry florals), with its semi-dried leaves rubbed in some unctuous fruity syrup, altogether coming across with a half-smoked quality (like a cigar left lingering on the burn, evoking all at once aromas of coffee,woods, and spice, against the more funky aromas of grass, earth, and even meat) but despite this, you’ll always return to the earthy, brown-green tinge of patchouli.